Take a second and name two dishes that come to mind when you think about a tasty, cooked breakfast. You may have thought “sausage and hash browns” or maybe even“ bacon and eggs” so let me clarify a little…. Try and name 2 sweet breakfast dishes that you could vape that you would use maple syrup with.

Now I think you are probably thinking on the right track. You may have even dead guessed the two vape superstars I’m going to be talking about. They do as good as one can to emulating 2 breakfast classics,  French toast, and pancakes. The only way they could improve is adding Hot blueberry muffin and Belgian waffles. 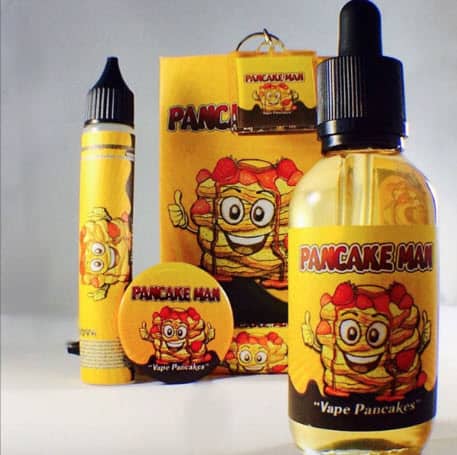 Vape Breakfast Classics launched with their first e-juice as Pancake Man because, when they did a detailed survey, Pancakes was the most popular cooked breakfast with just about everyone and the 2 favorite toppings people use was maple syrup and whip cream. Remember that when Family Feud calls you on the show to compete.

Pancake Man tastes just like fluffy pancakes that are covered in hot melted butter. Add strawberries and fresh whipped cream along with maple syrup drizzled over the top and you get an idea of the taste. No pancake is quite right without syrup right?!

The reviews on this flavor have been exceptional. Customers say that they can truly taste the flavors described and begin to reminisce about their favorite pancake memories at home that mom used to make or at a special restaurant they used to eat at growing up as a kid. Is it possible that Vape Breakfast Classics could follow this up with something just as good?

Some vape fans feel that “French Dude” is superior to Pancake Man overall. Keep in mind though that “French Dude” is made to resemble French toast instead of pancakes like “Pancakeman”. It has more of a bread taste (as it should) and has a hint of cinnamon as good french toast would. So they are somewhat different and hard to compare because of that.

I will say that pancakes are very similar to a bread flavor,  but vapers swear that the two are different. Besides, Pancake Man has strawberries and a rich, cream whip cream flavor that French Dude does not have.

Other than that, the drizzled maple syrup and hot melted butter flavors take you to a place in your “taste memory” which is like a riding a time machine into a past memory and eating at the breakfast table again.

There is another site that tries to associate Vape Breakfast Classics with Granny’s Pie (which VaporFi also carries) and that is just confusing to me. Purely a sales tactic I’m sure as no one else I know has ever made this kind of connection between the two. Granny’s Pie formula is even close to the same. You won’t find Peach Cobbler as one of my top 3 “breakfast classics”. Peach cobbler for breakfast?? Ok…

Ok, this is another confusing part to me. On one site I went to, it says you can get 120 ml for $30. Let me be really clear here, Vape Breakfast Classics E-juice kit contains a single 60-ml bottle and then it also has two empty unicorn bottles in case you want to take smaller amounts out on the road.

I should probably also note that you also get in the kit: stickers, a button, and a keychain. This may sound like silly bonuses to get you to pay $30 for the kit, but in the end, the price of your e juice (when you break the numbers down) is just 50₵ per/ml, that alone is worth it.

There Are Two Complaints I Will Note

I do have a few bones to pick here.

The first is not even having their own website! How about even having a Facebook Fan page or any social media presence! Get with the times here. Maybe I just missed it but, there is nowhere I can to find out more about the ingredients they use or even how the Vape Breakfast Classics e juice is made.

The second issue I have is their labels. There is no way the FDA would let these fly people. I guess they are going to take you down unless you can make a change soon. At least try! We would love to see you stick around.

Other than that Vape Breakfast Classics is a popular brand of e-juice with a really strong following and I can see why. Let’s hope they will stick around.