How did Five Pawns get started? First, they started with the name which was inspired by the bottles and drip tips before the makers of their e-juice. They resembled chess pieces so it just made sense. The point of their own brew of e juice would be like a pawn in chess, as defined below in both the dictionary and in their bio:

“Someone or something who is used or manipulated to further another person’s purposes. We thought of our liquid much like the ‘pawn’ [which] moves only forward and is often sacrificed (much like our liquid).”

Five Pawns started out with only 5 e juice flavors, which added to the name, each liquid was unique in the market due to their extreme complexity. They have recently added another five flavors and a special reserve assortment that is hard to get ahold of.

The real goal at Five Pawns is to serve the customer, giving them the best vape quality products, as well as encourage the investors, staff, and customers to be a partner in a worthwhile effort. Customers are welcomed to open arms in their growing family that is based out of California. 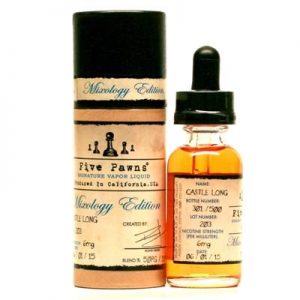 How Five Pawns Is Made

Five Pawns E juice is blended by hand in micro-batches that amount to about 500 bottles a batch. Each of these bottles numbered and carefully stored. Their 30-ml bottles have anywhere from 0 to 18 mg nicotine per/ml. Their second group of flavors was created to give you the experience of the five basic human tastes: bitter, sweet, salty, sour, and savory.

If you want to try their original Insignia series of e-liquid, you can get a sample pack that is 4 ml or liquid per sample and costs $23.50. The flavors you get in the sample are Castle Long, Grandmaster, Gambit, Queenside, and Bowden’s Mate. The name that caught me out of the gate was “Gambit,” which is a term for a sacrificial move now so you may make a better move later on, much like giving up your pawn in the game of chess, so you can win the game at a later stage.

This could also be seen as a “risky move”, much like the move that Five Pawns took when they invested all of their time and money into a company they had no idea would even make it, much less take off the way it did. The “Gambit” paid off and now Five Pawns is one of the highest-rated e juices companies in the US today.

If you are curious what Gambit tastes like, I would describe it as a freshly baked apple pie with a flaky crust, that is glazed with caramel and topped off with vanilla ice cream with whipped cream that is sprinkled in sugar. Man, I crave it already. 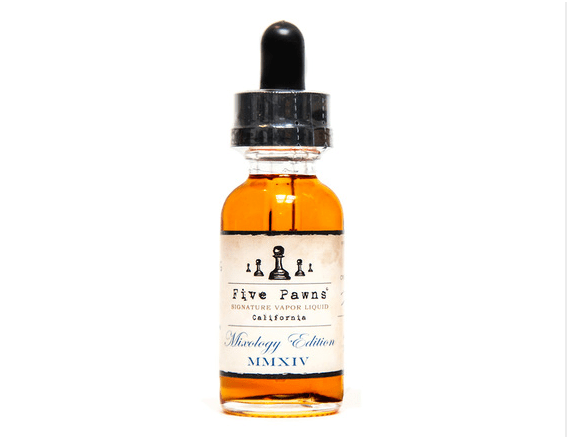 While still based on the same tastes mentioned earlier, the mixology series is inspired from high-class, swanky cocktail bars where they only serve the best bourbon and fine aged whiskey. What was the inspiration for some of the names in this line you might ask?

Well, “Absolute Pin”, as they call it, is a reference to a chess move where the king and another chess piece are pinned or locked together. If you move the other chess piece, the king then becomes vulnerable creating an “absolute pin”. If I had to describe the flavor, I would say it is a mixture of caramel, Irish cream, and cinnamon with absinthe. Very unusual flavor to say the least, but well worth the experience.

I will put a video below this article that shows just how high and strict Five Pawns standards really are. This is no fly by night, run of the mill operation that was created in someone’s garage or in a run down wear house.

Five Pawns uses only the latest and highest rated machinery to ensure the best results for their products and the end customer. Some of their safety measures include child-proof caps as well as natural flavor extraction which is one of the reasons why the taste of Five Pawns is so amazing and unlike any other.

Special bonus: Get 15% off any order of Taken Three products use code TAKEN15OFF

Be sure to also check out our top brands of E-liquids.
Tweet Pin It