Please don’t take their name literally…Bleckk. The e-liquid industry has it’s hands full when it comes to providing natural ingredients for their concerned customers who are worried and also to follow future FDA regulations. I’m positive that the FDA would not be happy with any company using “real beetle juice” instead of tobacco in your e liquid. It’s only a name 🙂

The Name “Beetle Juice“ was taken from the movie “Beetle Juice” which Michael Keaton stared, who is not on the label by the way. Most likely following successful products from organizations like AEMSA, Beetle Juice Vapors uses a real image of a horned beetle rather than a cartoon style figure instead that may attract a younger audience. 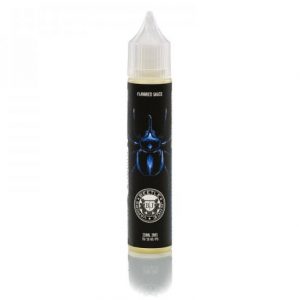 Three things make these Bottles of Beetle Juice Vapor stand out. The first is clearly their beetle logo, with every flavor having a different color but the same beetle shape which is a three-horned beetle from what I can see.

They have six colors of beetles and six flavors with the original being all black which makes an attractive label.

The Second reason is that the bottles have 17 ml instead of  10 ml, 15 ml, or 30 ml like most e juice companies would offer in boutique juices. That’s random and easy to identify. The Third reason is the shape of the Beetle Juice Vapor bottle is extremely weird. It looks more like a giant marker or pen rather than a bottle.

Beetle Juice E-juice is made with 70% or 80% vegetable glycerin (VG), which mainly targets sub ohm vapors. Needless to say that most gourmet e-juice companies do the same. Not many people are interested in gearing their product lines towards beginners’ with eGo pens. They focus more on experienced vapors and what they desire out of a quality e juice.

The first flavor they offer is “Bedrock” which is a cereal vape that is a mix of sugary fruit and milk. If you grew up eating fruity pebbles as a kid (Flinstones), this is a great representation of that cereal flavor.

Blueberry Hills is the next flavor on the list which tastes like a blueberry filled toaster treat (or close to blueberry) with an icing coating. It will also give a lightly buttery finish.

The Third flavor is “God’s Nectar” which tastes like a peach filled gummy treat.

“Miley” is a blend of Pumpkin Spice and Chai Latte which tastes ever more heavenly than other creamy e juices that Beetle Juice has. I will mention that these are all 80% VG e juices.

The last two we will go over are Riddler and Now & Later which only have a 70% VG. Riddler has a mix of pear, green apple, and berry which gives you the sensation of both sweet and tart. It makes me think of Riddler in the 60’s Batman shows wearing all green from head to toe. Their “Now & Later” flavor mixes cherry and pomegranate giving you a rich gourmet taste. Like the “Riddler”, this flavor is also sweet and tart.

Where To Buy Beetle Juice Vapors?

Beetle Juice Vapors sells their product through online distributors and market distribution much like most large e juice retailers do. We even have a link below to shop online if you prefer.

People carrying Beetle Juice Vapors don’t typically take quality lightly as this really is a high quality gourmet vape that is made in American using top of the line ingredients giving you that gourmet taste everyone loves.

After you try any of the 6 Beetle Juice flavors for the first time, you won’t ever forget them or their quality. Don’t take my word for it, try them for yourself.